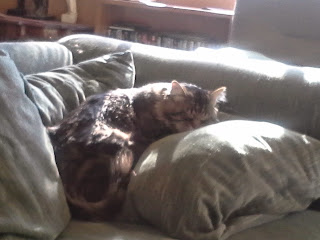 It is all too common to think of animals as "dumb" and incapable of emotions, such as love.  Many people will tell you that animals only imitate love to get their needs filled; ie, "your cat only pretends to love you because you feed it."  My experience with animals says the exact opposite; that is, animals are capable of simple love.   My contention is that if we believe that God is defined by Love, then we have to believe that love is pervasive throughout all of God's creation.

I'll start with the example of Annie, a cat who belonged to a wonderful neighbor of ours.  Annie was an old cat, and she absolutely adored her human.  She had been abused by her previous humans, and didn't trust men much, but she had an immense amount of love to share.
Tragedy struck when Annie's human mommy died.  It was just the two of them, mommy and kitty, in the apartment, and Annie was alone.  Fortunately, her human mommy's human daughter took her in and took incredibly good care of her.
Annie was well fed, well groomed, and doted on by the women where she went to live, but none of that mattered to her; she wanted her human mommy back.  She would run across town, despite her old, arthritic bones, just to sit on our doorstep and wait for her human to get home.  She never understood why her mommy didn't come back.  Annie truly did love her human, and I'm sure the two of them are happy together in the afterlife.

Let's deal with an issue which makes people say, "no, animals don't love at all;" the issue of animals eating their young.  Some species of animal do actually sometimes eat their young, and some more often than others. However, to dismiss all animals as incapable of loving because of this heinous action would be to ignore the fact that many human women, sadly, murder their own babies.       I'm not referring to abortion, that's a topic about which you're unlikely to see me blog, but babies after their born being thrown in trash cans, drowned it toilets, children driven off of cliffs by their mothers, and many more inexplicable, heinous actions.  It doesn't mean human women are incapable of love, not even those who are led to commit such a horrendous deed.  This post isn't about the psychology of infanticide by mother, so that's all on that depressing topic.

Let's take a look at happier examples of humans and animals living together, particularly cats and dogs.  Our animals are genuinely excited to see us, and it's definitely not just about food and treats.  They don't necessarily get food or treats every time they see us, and I know my own animals will even ignore treats given them just to come sit on my lap and get attention.
Cats and dogs are social animals who form close groups.  They want to snuggle with their human pack/pride members when we sleep.  I know my cat wants to snuggle even when it's blazing hot, even though he eventually gives up and lays elsewhere on my bed.  Yes, to some extent it's about safety in numbers, but it's also very clearly about affection for a close member of his family; his caregiver.  He wants to spend every waking and sleeping moment he can with me.  I know it's that way with many pet owners, and it's not just limited to those of the canine or feline varieties.
Cats and dogs also seem to instinctively know when we are well or not, and want to help us.  Dogs are well known for wanting to, and often succeeding at, helping their humans.  I've heard many stories of animals taking extra care to give extra attention and love for people who are sick.
I'll use another personal example of my former cat, Mihos; named for the Egyptian lion god.  I used to have terrible seizures, which are thankfully much more under control now, which would leave me helpless in the "post-ictal" (after seizure) period.  Mihos would sit right next to me until I could get up, and if my roommate was home Mihos would pound and scratch on the roommate's door until he came to help.
Another pack love example comes specifically with dogs and pregnant women.  If a member of the household is pregnant, anyone who acts threatening towards her better pray hard and run harder if the family dog sees it going down!  Yes, it is canine instinct to protect the next generation, cats have been known to stand up for small children too, chasing off dogs or even strangers who were threatening their littler humans.  However, it goes beyond instinct, to "that's my family, and you don't hurt my family," which is a major expression of love.
One last pack example is the love between pets in the same household, and I'll use the example of my mom's old Siamese cat and our dog.  The cat knew the dog since he was a puppy, and he was almost like her own baby.  She was an old lady even when he was young, and had a couple generations of kittens she had birthed and mothered, even grandmothered.
After the puppy grew up, he lived primarily in an outside yard during nice weather, and other dogs would come up to his fence to try to pick fights.  One day, a rottweiler came up and was getting really vicious in his barking and attempts to bite my dog through the fence.  We ran out, as usual, to stop the incident, but before we could get there the Siamese cat flew out the door and jumped up into the rottweiler's face!  A few whips with her claws, and that dog ran off crying.  That cat was not going to stand for someone messing with her puppy!

Now, one main contention is that people say love is a choice and animals can't choose to love, but I think that misunderstands the nature of love. Perhaps one can say that animals don't love in the same way that humans love, but they absolutely do have an abundance of love.  Perhaps there are even some species of animals which don't feel love in any way we'd recognize as such, or maybe even devoid of emotions altogether.  I certainly think at least mammals, and many other animals experience love.
Perhaps humans just over-complicate love, just as we do with other things, and to animals it's simpler.  Perhaps in some ways we even do understand love better than they do, but I think we could still learn a lot about love even through just understanding the simplicity of their love.